JJ: Sirja & I met in the summer of 2010, and although I had a little crush at that time, we didn’t get together until the 15th of July 2014, after months of pursuing on my side, and many long Skype conversations (which started after we reconnected during my visit to Helsinki at the end of January 2014).

When I started thinking of asking Sirja to marry me, I knew I wanted the proposal to be a surprising adventure (Sirja loves both), and I wanted the proposal to reflect the story of our relationship. I planned a treasure hunt that lead Sirja and her friend Eve to some of the important places that Sirja & I visited before and during our relationship. For every location there were a few things waiting for Sirja:

S: Two weeks before the proposal I got a text message from my good friend Eve. She asked me wether I’d like to have a picnic with her and other friends to celebrate the spring and last lectures being over. So when this special day came I didn’t have a clue what’s really going to happen.

S: I met Eve at the Manta fountain close to Esplanadi. I was a bit surprised that she was alone and none of the other friends had come yet (I was a bit late). Eve just said they are all late or that many couldn’t come. We waited and chatted for a little while and I was sharing about my frustration with my thesis. Then suddenly a random passing lady walked towards me, gave me an envelope and continued her way. My name was written on the envelope and I immediately recognized JJ’s handwriting. I opened the envelope and there was a clue card with the picture of coffee cup on it. On the bottom-right corner there was a link: sirjja.com and on the back of the card it said “Surprise!” ;). I immediately went to the website with my phone and it linked me to google maps with the location of the coffee place Kuuma in Punavuori. Eve was excited and insisted us to go there. I was hesitant because I thought it would be rude to not wait for the other friends that I thought were coming to the picnic with us. In the end Eve got my mind turned and we started heading towards our first destination.

JJ: Coffee has always been a big part of our relationship. We love coffee. We love spending quality time together. Even before we got together, we visited many coffee places. A few of them stand out to me: Porvoon Paahtimo (where we visited in May 2014, a few days after I told Sirja I wanted to go for her) and Kuuma in Helsinki.
We still go to coffee places often, to see more of the culture of a new place, but also to spend some good time together.

S: When we arrived at Kuuma I thought I’d meet JJ there but I didn’t. I sat down for coffee with Eve and shared her about why Kuuma was important for me and JJ. It was the place where I finally realized that I like JJ and started talking happily about the potential of us getting together (it was in June 2014). At some point the barista came and brought me an envelope with my name on it. 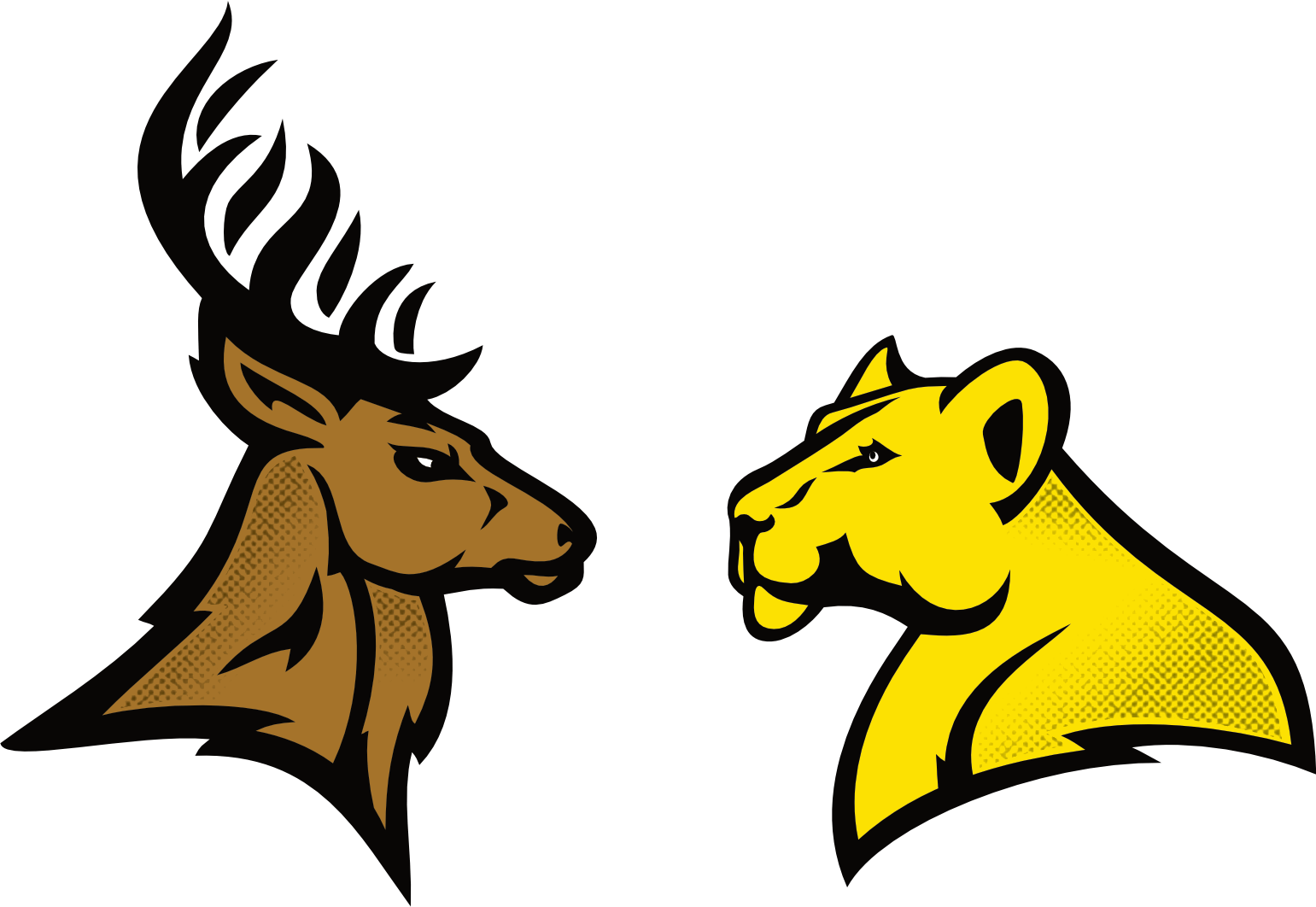 The Lion & the Deer

S: The next clue card had a picture of a lion and a deer on it. I immediately realized that I should go to Cafe Primula. We had been there with our friends Simon & Ella in January 2014, and played a game with 3 questions, in which each answer tells something deeper about how you see things in life. The second question in the game is “What’s your favourite animal?” and tells something about how you see your (future) partner. I answered deer (authentic, humble and sensitive but at the same time strong and majestic) and JJ answered lion (majestic, fierce but also able to rest, cuddly).

JJ: After playing this game, Simon asked me in private “So JJ, could you be a deer?”. Another time we were in Primula was on the 12th of May 2014 (exactly one year before I proposed), when I told Sirja I wanted to go for her.

S: When me and Eve came to Primula the bar tender immediately recognized us and had a cheeky smile on his face. He offered us champaign for a special price (which wasn’t JJ’s idea). Eve said to him that we came just for the envelope so the bar tender went to fetch it a bit disappointed that we didn’t take the champaign. When I got the envelope and I started opening it I finally started to realize that this picnic with friends wasn’t going to happen. Instead there’s this treasure hunt and I started to think JJ would probably propose me on that day. That’s a reason to celebrate so I said “we’ll take the champaign!”. We sat for a while and I started to solve this next clue. There was also a present attached to the clue. It was a a calendar with pictures of me and JJ’s past year together. 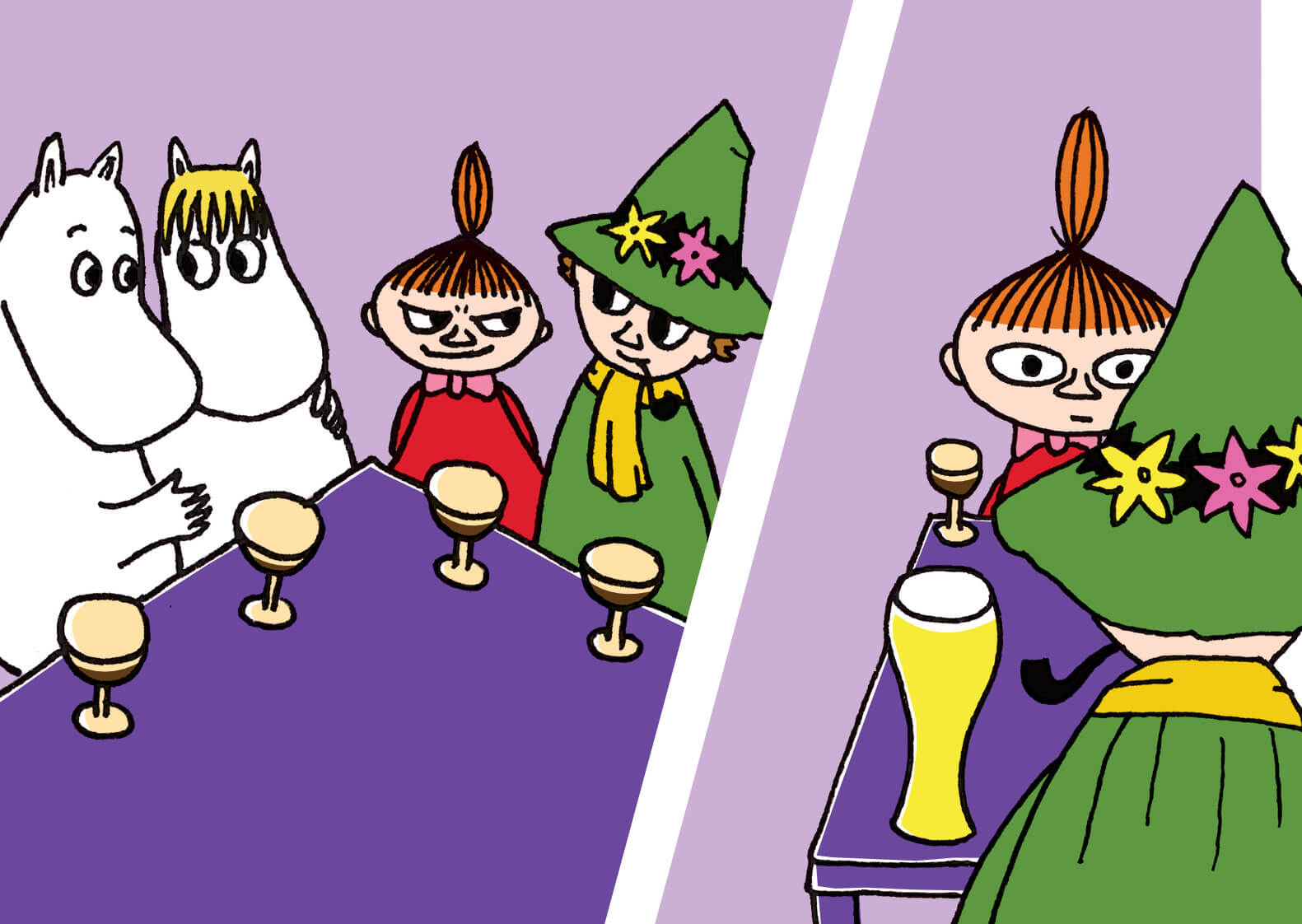 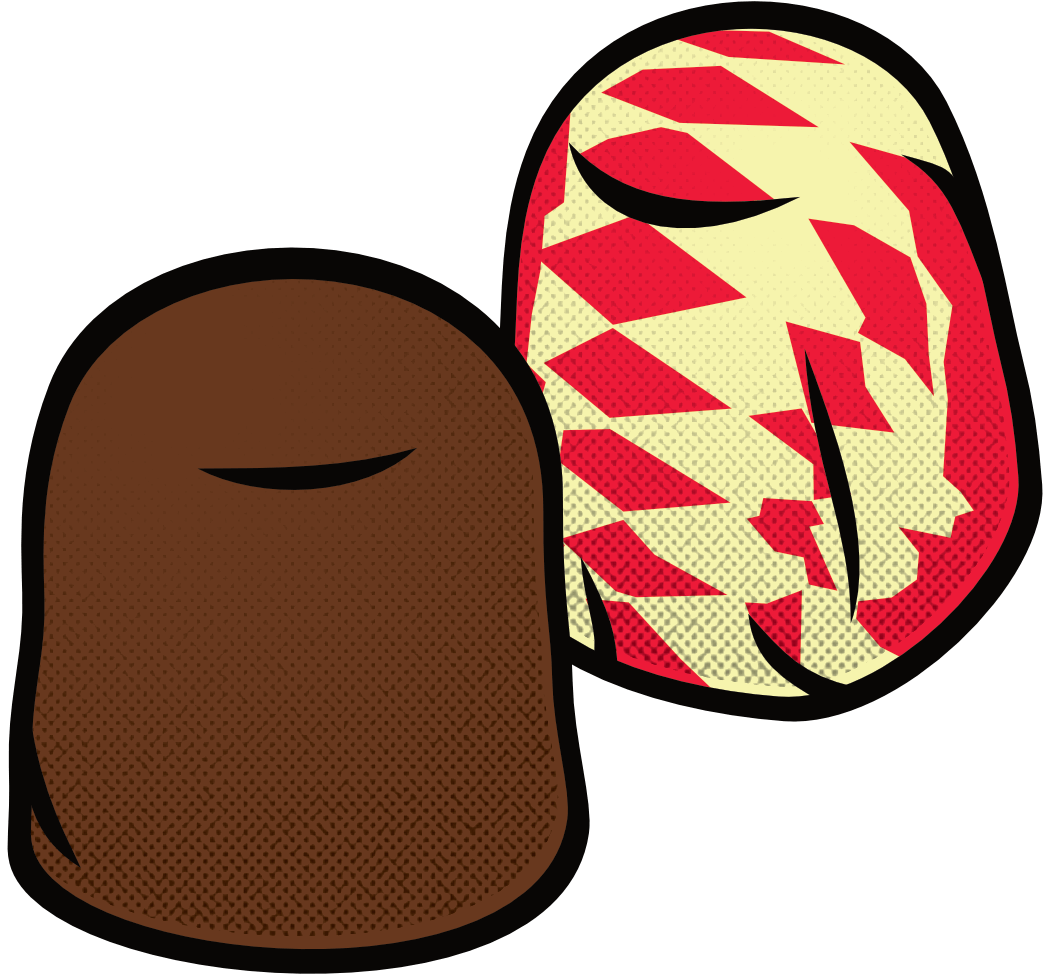 S: This clue card had a picture of two chocolate kisses. I immediately thought that I should go to Porvoo. In May 2014, we had visited the candy shop there which the chocolate kisses in Finland come from. We weren’t dating back then; JJ had only just told me he wanted to go for me but I wasn’t sure at all about him. When we were at that shop, I asked JJ “Do you want a kiss?” and he of course said “yes”! 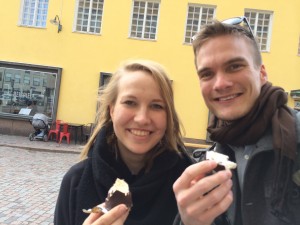 JJ: So she bought me a chocolate kiss. When we were outside, eating our chocolate kisses, I took a photo of us, saying now I have a photo of our first kiss (our real first kiss wasn’t until a few days after we got together in July 2014).
I wanted to incorporate this into the proposal-adventure, but a trip to Porvoo would be too far…

S: Eve asked me wether I’m sure about the next location being in Porvoo. After all it’s quite far. I started thinking about other possibilities and then immediately thought about the place where we had our real first kiss. It was at Töölö bay. Eve suggested us to check it first and then if there’s nothing we would head to Porvoo.
At Töölö Bay Simon (one of JJ’s best friends) was waiting for us. He was sitting casually on a bench with a box of chocolate kisses on his lap and an envelope. Simon told me: “one handsome foreign man told me to sit here at this time and give you these chocolate kisses and envelope”. 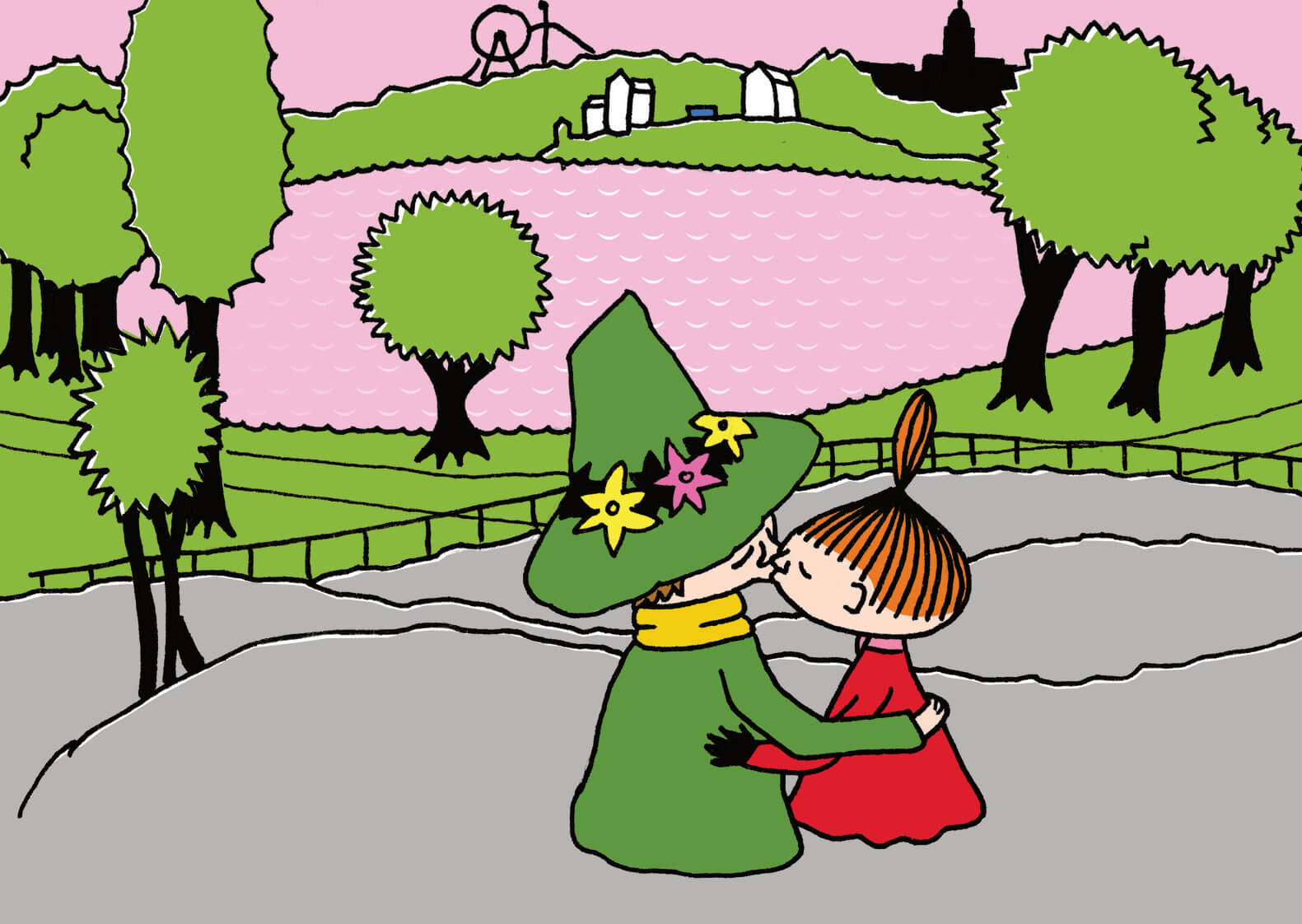 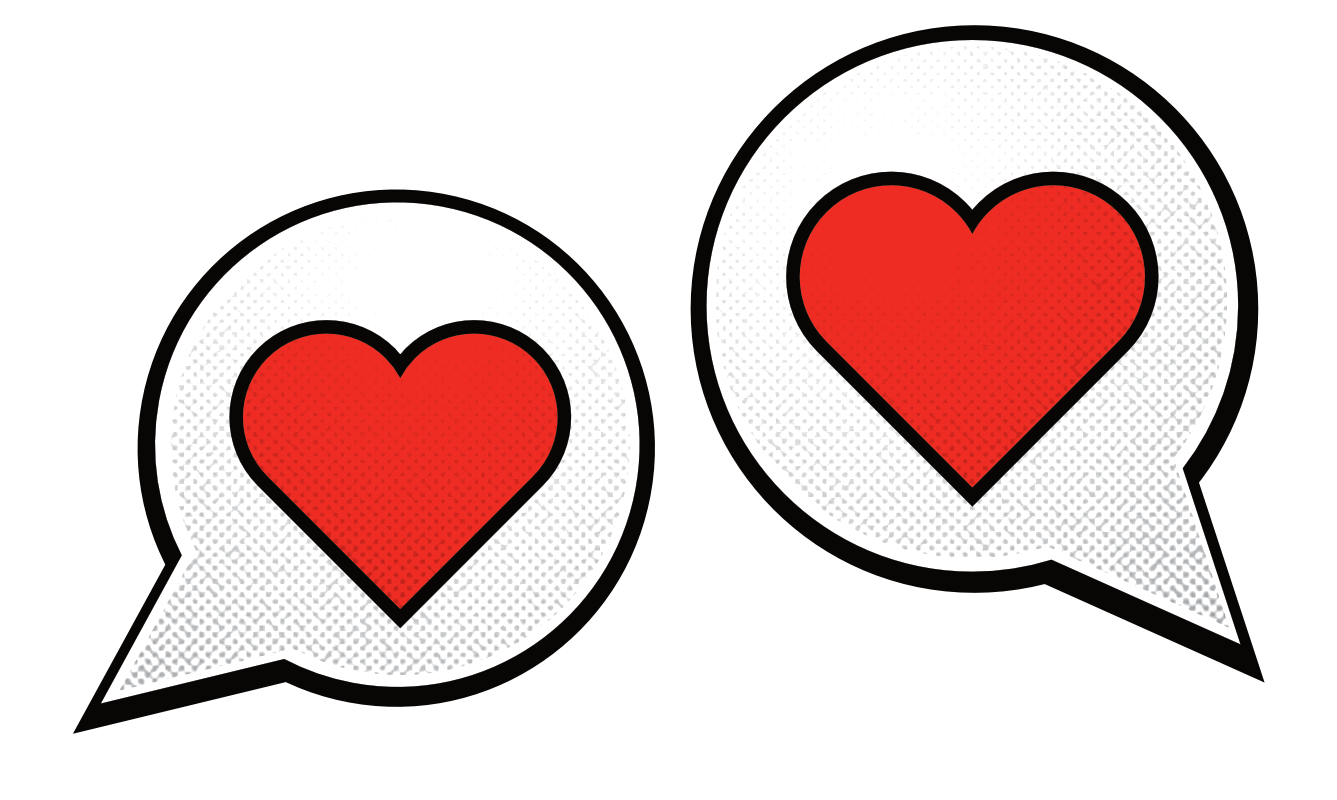 S: I opened the envelope and there was a picture of two speech bubbles with hearts in them. I realized this clue leads to the place where we told each other for the first time: “I love you”.

JJ: After we got together and had our first kiss, the love between us grew steadily and after a few months we both knew we loved each other. We had both been thinking it, but we hadn’t said it. So when we were at Kaisla in October 2014, enjoying some good beers (Achel Bruin for Sirja and Chimey Blue for me), I just had to tell Sirja I loved her. And she responded that she loved me too!

S: So I gave one chocolate kiss to Simon and started heading towards Kaisla with Eve.
In Kaisla, on the exact same place where me and JJ had sat, Eve’s husband Miika was playing a card game with his friend. He pretended being very surprised when he saw us but then in the end gave me the envelope with the next clue and the present (a big bottle of Karmeliet beer). The next clue was a boat and #jjsworldtour on the bottom-right corner. 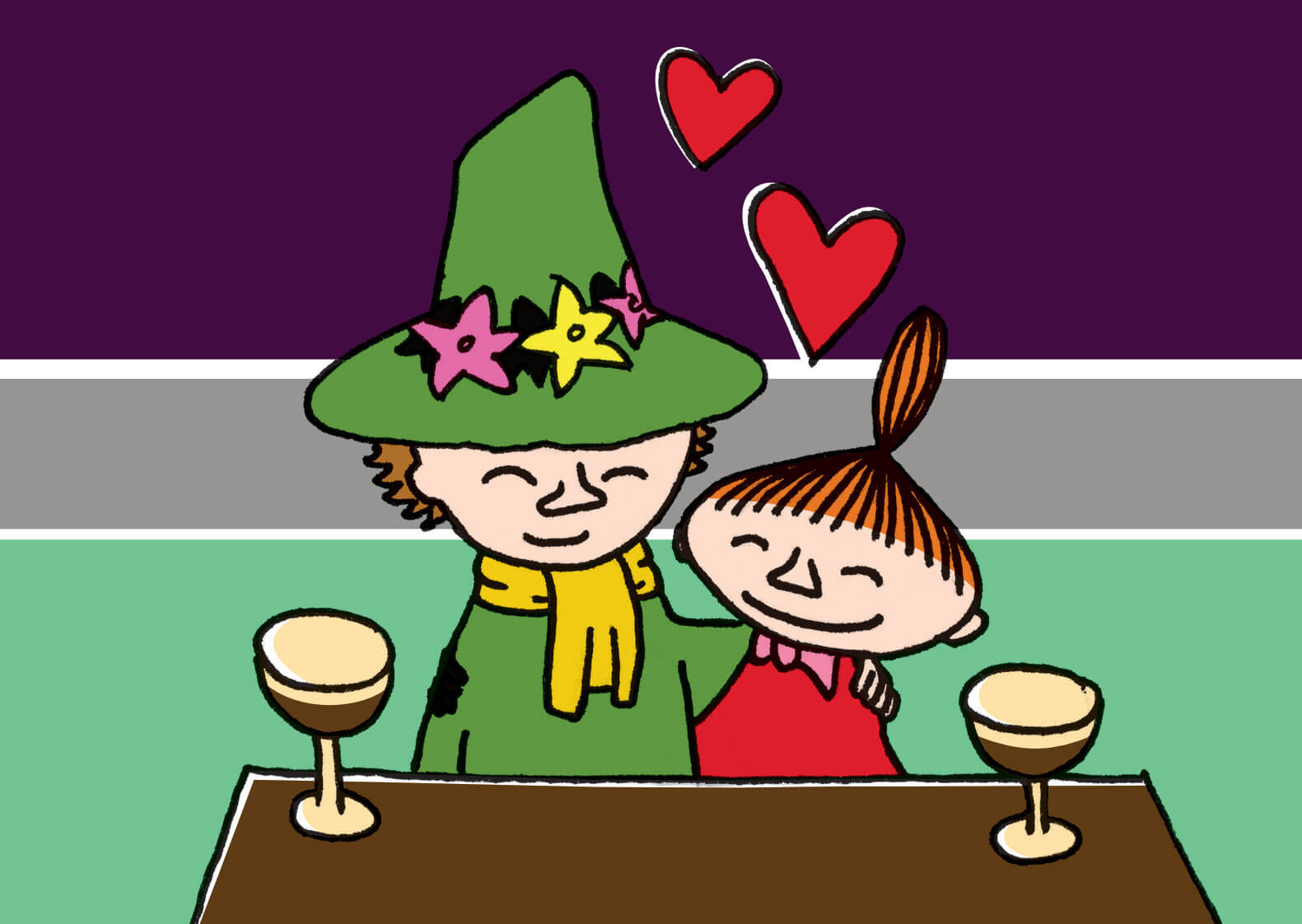 S: I checked #jjsworldtour on instagram and noticed JJ had just posted a picture of the location I would need to go next. This place didn’t have a special meaning for us yet. I knew immediately where the place was though, because it was very near to my faculty, the harbor of Merihaka. Eve and I started heading there and on the way she started preparing me for what’s coming next. She said that it’s been very nice to go on this little adventure with me but that she needs to go very soon. 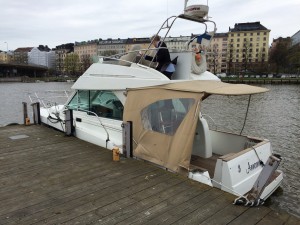 And there he was waiting for me… WITH A BOAT! I was very surprised as I couldn’t believe JJ had the money to organize this kind of thing. JJ and I greeted each other and then he gave me the next clue. Eve left us at this point and we entered into the boat. Inside the boat I saw JJ’s housemate Anni and her father and I realized how all this could be possible.

JJ: Sirja and I both really love to travel. We have traveled a lot together, and to get our travel photos on instagram organised, we use the hashtag #jjsworldtour (JJ+S world tour). I wanted us to travel during the proposal day as well, so I found an island, a boat, and a harbour where I could wait for Sirja. It was actually only fitting for our relationship to have a few new places on this adventure as well. 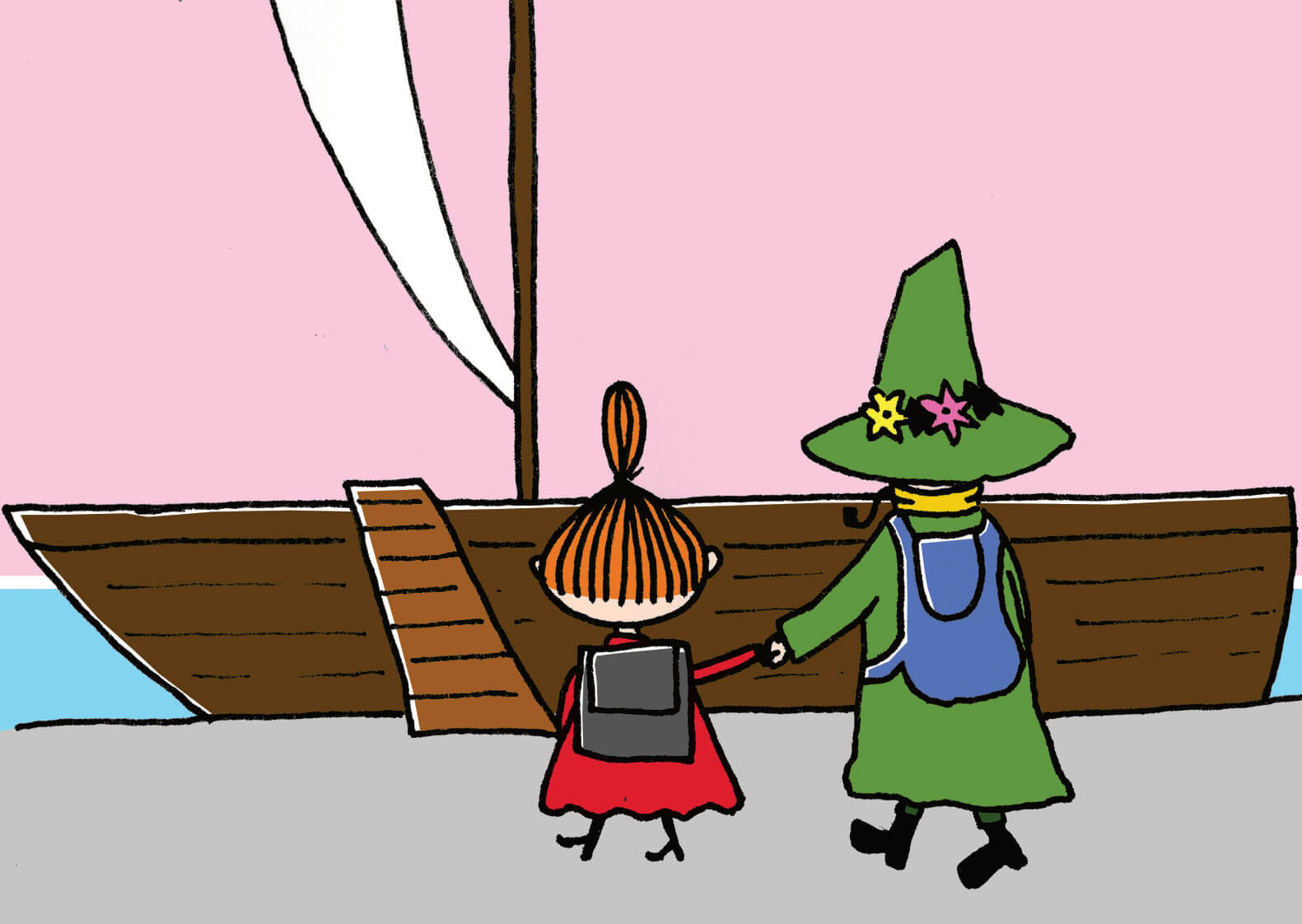 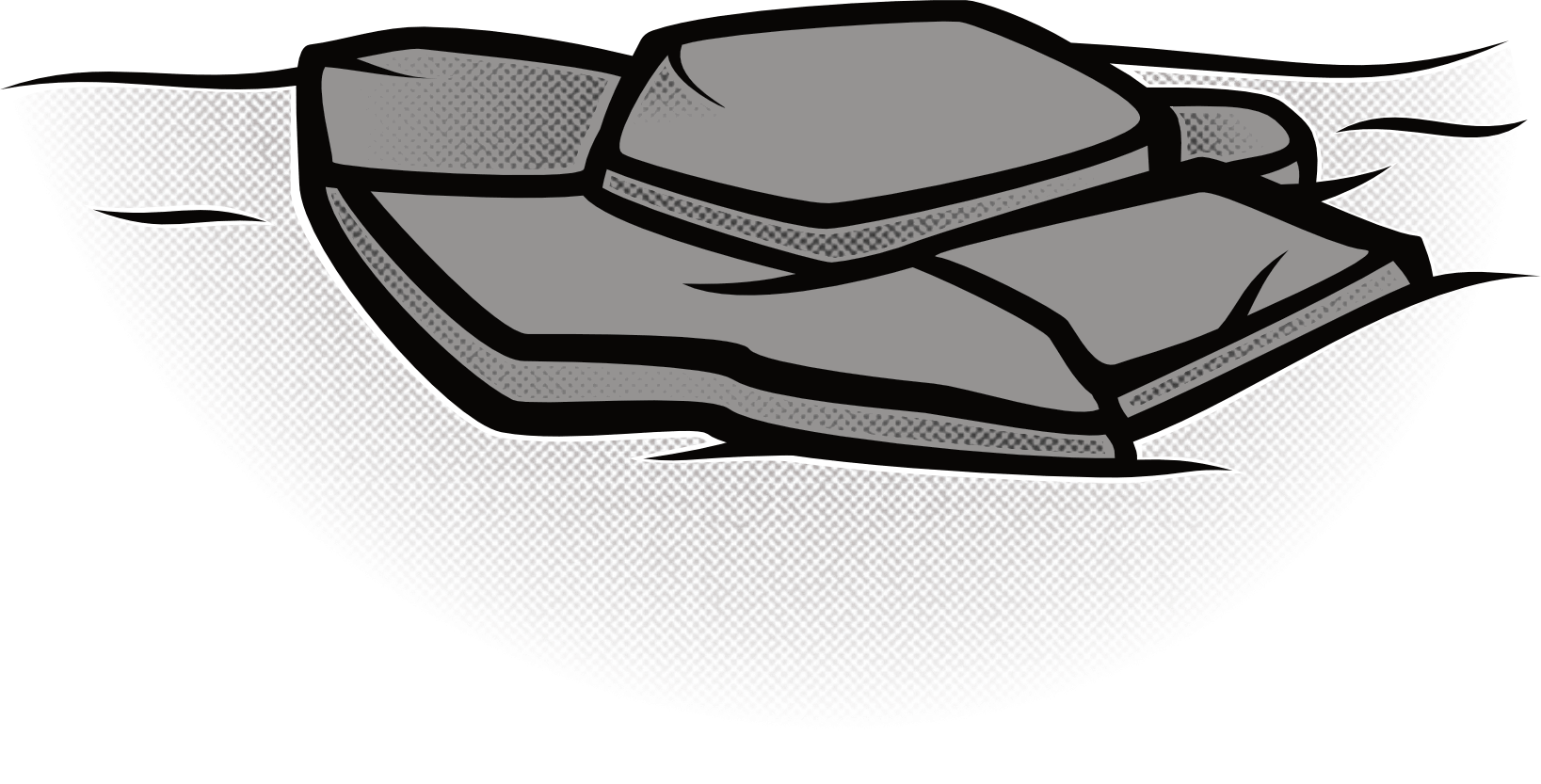 S: The clue that JJ gave me had a picture of flat rocks and a link to the location where we would go with the boat next, the island Vasikkasaari. We went to sit up on the deck of the boat with some warm blankets and the glasses of wine that Anni’s father had given us.
When we arrived on the island JJ took a big picnic basket with him and said to Anni and her father that we’d need about one and a half hour. So they left with the boat and we started heading towards the other side of the island.

JJ: Sirja and I have had many great moments sitting on flat rocks, often overlooking the sea (often sipping a good beer). There are many places around Helsinki with flat rocks, and Sirja in particular loves them. It was obvious to me that it was on flat rocks that I had to ask Sirja to marry me. 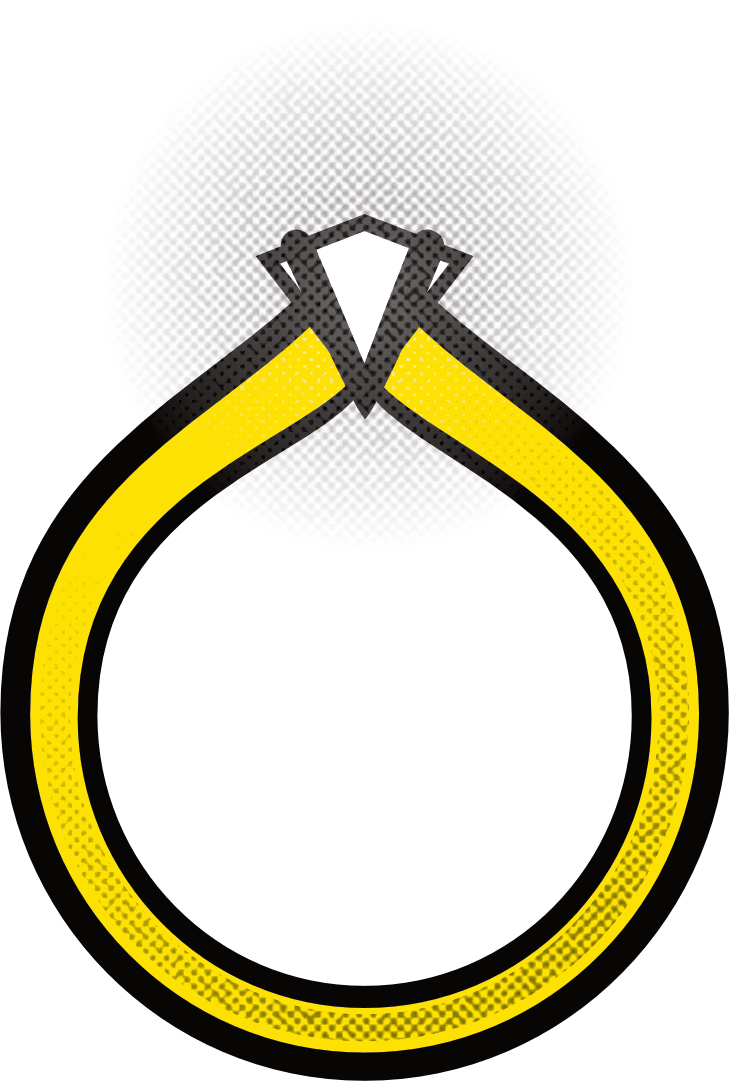 S: When we arrived at the flat rocks just before I was about to sit down on the picnic blanket JJ came in front of me and started having his speech. In the end of his beautiful speech he kneeled down on one knee and asked me to marry him. I was so touched ad happy on that moment that I started to cry and laugh at the same time. It took a while for me to say yes so JJ had the chance to also ask me in Finnish: “Tuletko vaimokseni?”. And then I said YES!

JJ: I was actually happy that I finally got to use that Finnish sentence; one of the first Finnish sentences I ever learned!
So now we’re engaged! We’re very much looking forward to getting married, and to continue writing our love story!